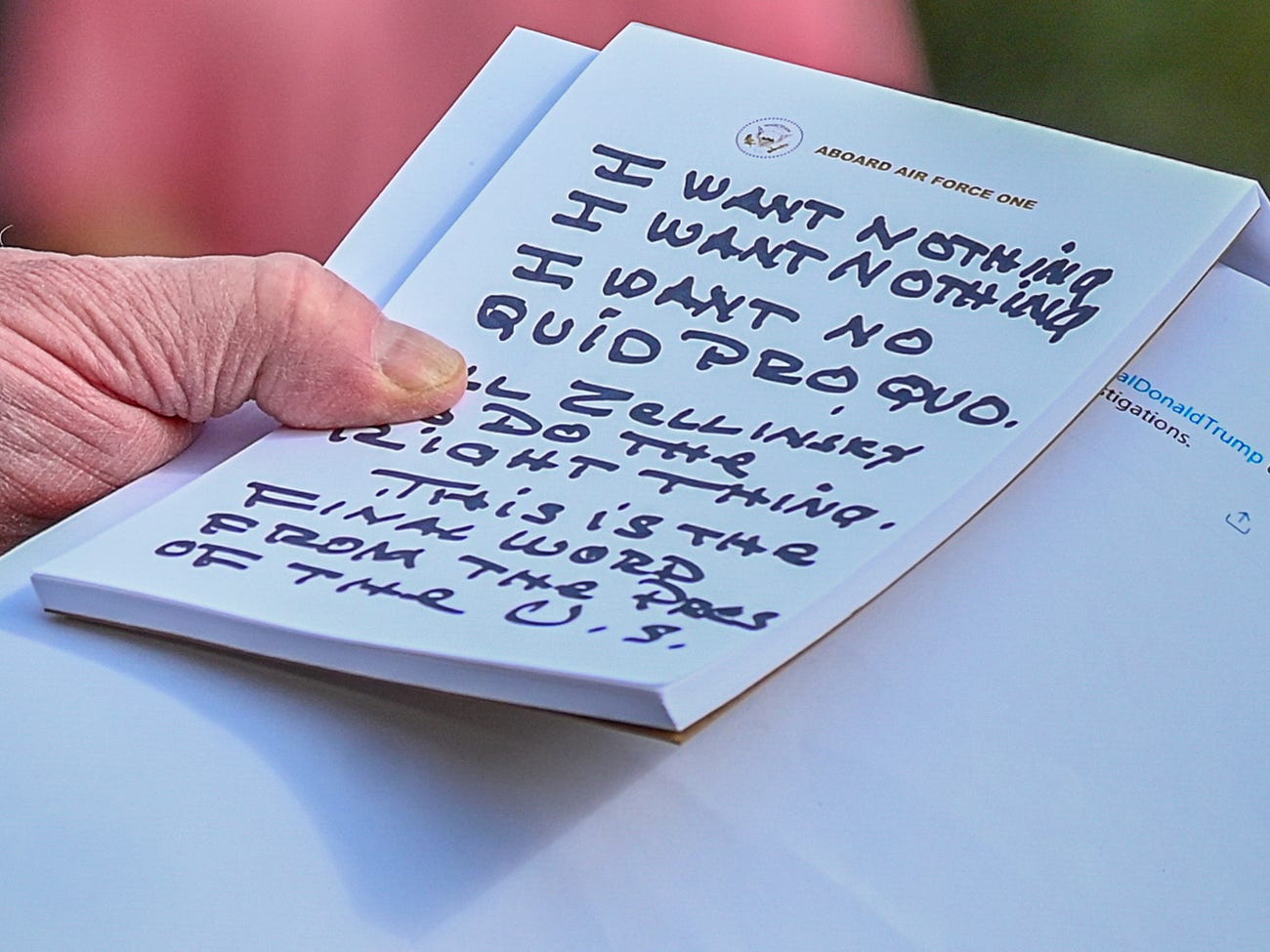 No quid pro quo. So goes the latest talking point in the pretzel logic of the GOP. Let’s start at the beginning.

First, Trump did nothing wrong. Some crazy whistleblower without any first hand knowledge of the phone call to Zelensky reported it.

Hearsay. The whistleblower never heard the call, so he or she could not know what was on the call. So, nothing to see here.

Then we learned that the Inspector General looked at the case. He did some investigating, as he is supposed to. And he found that there was some substance to the whistleblower complaint.

But Mr Trump did nothing wrong, so he released the perfect transcript of the call. Well, not exactly the transcript, but a partial transcript with some parts missing. But it was perfect. See. Just another plot by the Dems to get Trump.

Then we read the partial transcript and OOPS. In it Mr Trump is clearly asking for a “favor” from Zelensky. The “favor”, it turns out , is to investigate “corruption” And he specifically mentions the Bidens.

No problem, says the Trump supporters. He never specifically tied any conditions to this request. Just asking and not getting what you want is not a crime. Trump never did anything to coerce the Ukraine.

But then… it is learned that the military aid to the Ukraine was put on hold. Ukraine, in the middle of a border war with Putin. Ukraine, which badly needs military help and Congress voted to help. And the Pentagon is ready to deliver. Then a hold is placed on the aid. By the White House. No one knows why. But, no problem. As Kelly Anne Conway says: Just a coincidence!

So, no quid pro quo.

Now quid pro quo usually means that I will give you something and then you give me something. These “somethings” have value. And they are “somethings” I would not normally get. “Somethings” I may not even deserve.

So, does Ukraine get “something” they did not deserve? Nope. Eventually, after the whistleblower complaint became public, Mr Trump released the military aid. But this was aid they DESERVED. It was not a “quid pro quo” because it already supposed to go to the Ukraine.

Trump did not offer the Ukraine anything new of value. They already had a right, under the law, to the military aid.  Did I mention they were fighting Putin? So any weapons Trump sent to the Ukraine might be used to kill Russian soldiers or  lackeys. Putin was not happy.

So, there was no quid pro quo. The GOP is correct.

Just give Mr Trump a political TV ad so he can call the Bidens crooks. Don’t worry about finding anything, the announcement is enough.Then Fox “news” can spend every day talking about the criminal Bidens. Every hour. Every minute.

That is not a quid pro quo. It is extortion.

Extortion: the practice of obtaining something, especially money, through force or threats.

So we now have the entire Republican party standing behind a man who has used extortion on an ally who is trying to survive the attacks by Putin. The GOP saying it seems ok to them. Extort an ally? Is that wrong? Is that an impeachable offense? Undermining the 2020 election? Is that wrong?

The stench of the GOP grows daily. Extortion is not a problem. What next? Perhaps an open murder on 5th Avenue?